After a strong start in 2020 for residential property sales in Edinburgh, Lothians, Fife and the Borders, the market experienced the repercussions of social distancing due to COVID-19. The volume of property sales dropped by 9.2% year on year, with much of the decline concentrated in the final two weeks of March.

The same areas experienced an 8.4% drop YOY in the number of new homes coming to market. Again, the decline was concentrated in the latter part of March. Edinburgh’s sales volume recorded a 16.9% decrease in the first quarter of 2020 and a 10.2% drop in the volume of listings compared to the same time last year. 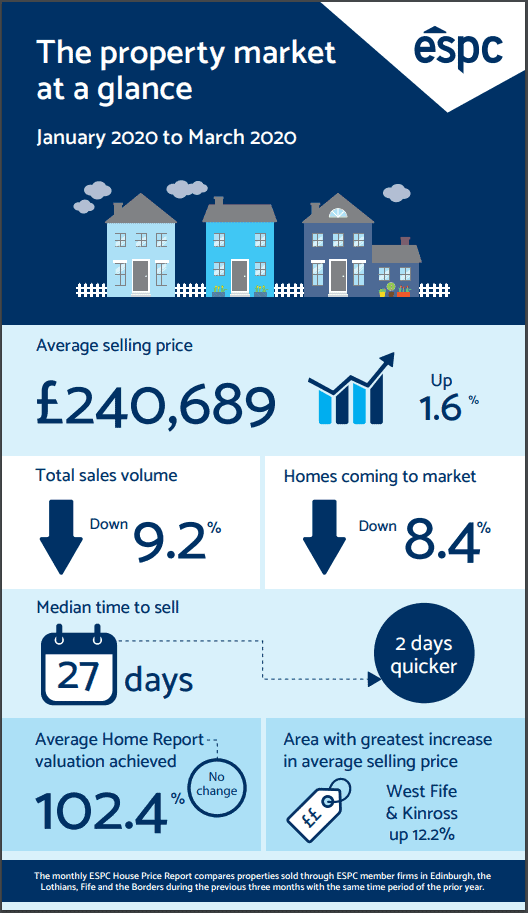 Business Analyst for ESPC, Jamie Fraser-Davidson, said: “In the first quarter of 2020, there has been reasonably significant decreases in property sales volume and the number of homes coming to market in Edinburgh, the Lothians, Fife and the Borders.

“These declines were concentrated in the last fortnight of March, caused by the COVID-19 outbreak in the UK and resultant social distancing measures.

“However, during this three month period, average property selling prices and the average percentage of property valuation achieved have remained relatively steady compared to last year.”

Certain areas outwith Edinburgh experienced significant changes to the average selling property price compared to the same period in 2019. West Fife and Kinross recorded a 12.2% increase to an average of £177, 053. Dunfermline saw an 8.6% increase and West Lothian 10.2% YOY. The Borders average selling price decreased by 6.3% in 2020, compared to the same period in 2019. East Lothian and Midlothian’s average property selling price remained similar YOY; there was a 1% and 1.9% increase respectively.

Edinburgh, Lothians, Fife and the Border’s median time for a property to go under offer between January and March was 27 days; two days faster than last year. This figure for Edinburgh was 23 days, which was four days faster compared to the same period last year.

ESPC’s CEO, Paul Hilton, said: “As expected, the current social distancing measures have impacted the volume of property sales and number of homes coming to market. Prior to the last two weeks of March, we were seeing a strong start to the year, both in terms of sales and instructions.

“We expect overall market activity to be much lower than usual for this time of year while these measures are in place. However, since the commencement of social distancing and the daily restrictions on everyday lives, some of our agents are still reporting that they are receiving offers on properties, often over the Home Report valuation. This indicates that confidence remains in what has historically been a very resilient marketplace.”

Craig Forster, Partner at McDougall McQueen, commented:  “In the last two weeks, despite the temporary closure of many of our branches as a result of the social distancing measures imposed, our teams, who are operating remotely, have continued to receive and make a number of offers for properties throughout Edinburgh and the Lothians. Last week we received seven offers for seven different properties in one day alone.”