Earlier this week it was announced by the Office for National Statistics (ONS) that the Consumer Prices Index (CPI) measure of inflation remained at 2.8 per cent in March, the same as it had been in February. Rises in inflation for audio-visual equipment and books, newspapers and stationery were offset by downward trends in furniture and furnishings, motor fuels and meat.

This overall inflation figure remains well above the two per cent target set by the Bank of England’s Monetary Policy Committee (MPC) and experts predict UK inflation will reach three per cent at some point this year. In this context it is worth noting that average rent levels have certainly not risen at the same pace.

In the forthcoming Citylets report for Q1 2013 we see that average rents for Scotland are up by just 1.7% on the year which is well below the latest CPI figure.  This is the overall national picture but interestingly all the major urban  markets  have seen above inflation rent increases. Our simple advice is to treat any stories that you read about runaway rent increases with a pinch of salt, unless of course you hear them from us. 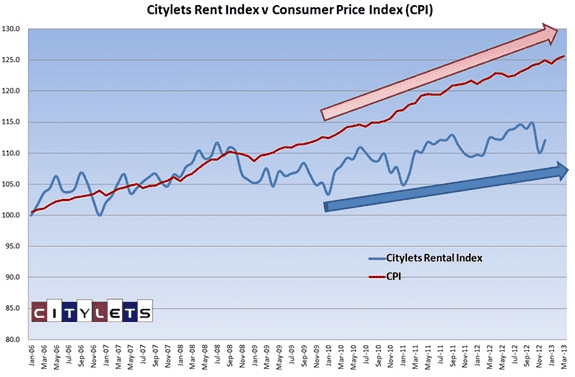