ESPC’s House Price Report for Edinburgh, the Lothians, Fife and the Borders showed that the volume of properties coming to the market in the last three months decreased by 2.9% year on year (YOY), with the capital itself reporting a more significant decrease of 7.5%.

ESPC’s Business Analyst, Jamie Fraser-Davidson reported: “From August to October 2019, there has been a marked year-on-year decrease in the number of properties coming to market in Edinburgh. It could be that seller confidence waned slightly in the run up to the 31st October Brexit deadline. As this has now been delayed until January, and a General Election has been announced, we may possibly see more impacts on buyer and seller confidence in the coming months.

“However, an additional factor could also be related to the order in which people choose to buy and sell property. We are hearing increasing reports of people choosing to buy subject to sale, which has not been the norm in Scotland in recent years. Therefore, if people don’t find the right property, they won’t put their home on the market, affecting the supply of new properties.“ 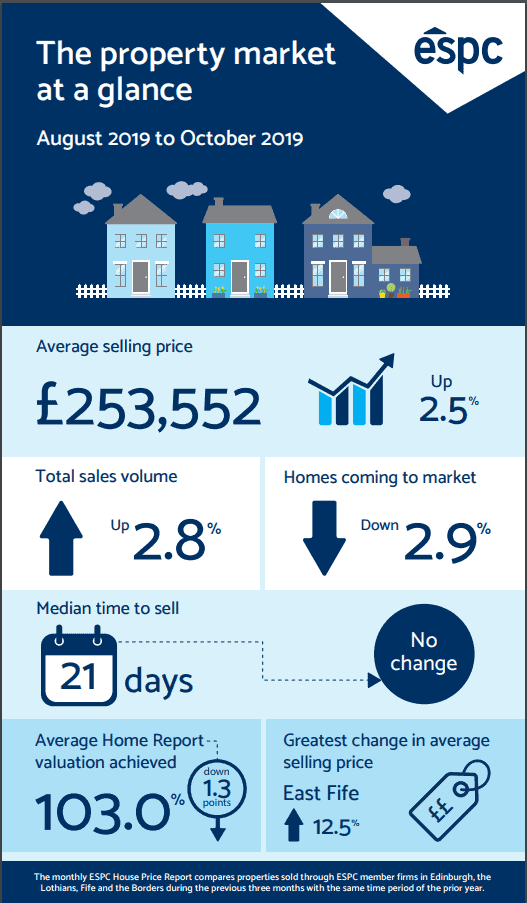 Sales volume, however, increased in the last three months for Edinburgh, the Lothians, Fife and the Borders by 2.8% annually and Edinburgh remaining relatively steady with a decrease of 0.1% YOY.

Three bedroom houses in South Queensferry and Dalmeny experienced the greatest growth in average prices, recording a 33.9% annual increase to £299,864. The significant uplift is mainly attributed to a reduced number of terraced home sales, and a greater proportion of detached and semi-detached houses selling in recent months.

Average price of properties in the Borders decreased by 5.6% while average property prices in West Lothian and Midlothian rose by 4.5% and 3.9% respectively.

One bedroom flats were the fastest selling property type

One bedroom flats in Leith Walk, Easter Road, Pilrig and Bonnington were the fastest selling property type with a median selling time of just 12 days.

When it came to average Home Report Valuations, properties in Edinburgh, the Lothians, Fife and the Borders achieved 103% compared to 104.3% for the same period last year. One bedroom flats in Dalry, Gorgie, Slateford and Chesser achieved the highest average Home Report Valuation of any property type at 107.4%. Properties in Edinburgh achieved 104.7% on average, compared to 106.2% last year.

Jamie Fraser-Davidson stated: “Across Edinburgh, the Lothians, Fife and the Borders, average selling prices continue to rise, but the rate of growth is still slower than we have seen previously. Meanwhile, the percentage of Home Report Valuation achieved continues to decrease. This suggests more favourable conditions for buyers, which is positive. However, short selling times and a high percentage of Home Report Valuation achieved indicate there remains relatively strong demand for first time buyer homes in the city.”