Reading some sectors of the press would leave you feeling that the Scottish Private Rented Sector (PRS) is facing a wholesale crisis with rents out of control nationally.

The evidence to the contrary is conclusive. Rents are, on the whole, falling in real terms (adjusted for inflation) and in many cases, well, simply falling . Nowhere is this better represented than in our table below tracking the performance of rents against inflation from Q1 2008 to Q2 2015. Rents have fallen in every large town in Scotland. 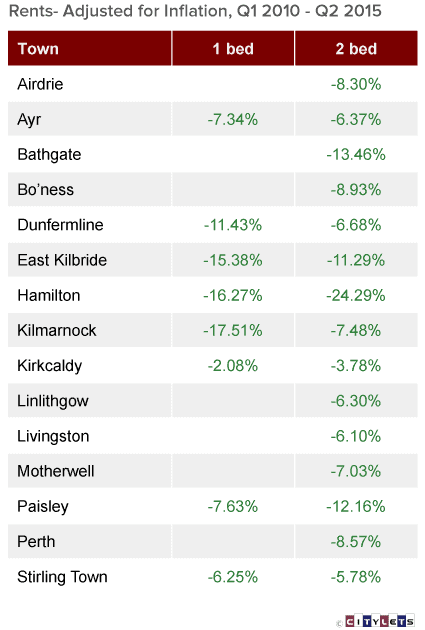 What’s The Picture In City Hotspots ?

The figures in Scotland’s key cities are quite surprising. Only the Glasgow 3 bed market has significantly outperformed inflation over the 8 year period. 2 and 3 bed properties are up in the largest cities of Edinburgh and Glasgow, but 1 beds are down.

In Aberdeen, all recent rises have been wiped out and both 2 and 3 beds are down with 1 beds expected to follow shortly. In Dundee, rents are down across the board in real terms.

With all this in mind, it does make you wonder if it is right that those who seek to warp perception should not be held accountable. Is it really ok to say black is white to suit a pre-conceived agenda?

It is true that rents in the Scottish Private Rented Sector have been rising faster in some areas in recent years, most notably in Edinburgh. But the same was true in Aberdeen up to around a year ago and that market is now falling fast. Nor will it be stabilisng anytime soon if the propsects for a quick resurgence in the oil industry are as bleak as portrayed.

Citylets, like many others, awaits the detail behind any proposed rent controls. If they are related to inflation, it presently seems that they will have meaning in very few areas indeed. For a more granular look at postcode level, visit www.citylets.co.uk/realrents/

What is, on the other hand, universally agreed is that we are facing a genuine housing crisis and the sooner we can deal with the root cause of undersupply across all tenures, the less energy we would spend attempting to address the symptoms. Especially when many economists view the proposed medicine as likely to inflame.