As the Private Housing (Tenancies) (Scotland) Bill continues to pass through the Scottish Parliament, which includes calls for caps in Rent Pressure Zones, the market continues to ease with the latest Citylets Quarterly Report showing that average rents have fallen again, now at £747 per month- down from £757.

Annual growth has also again slowed from 2.9% as at Q3 2015 to 2% as two powerful and competing forces from the Aberdeen and Edinburgh markets continue to battle it out for primary influencer on the national figures.

Average rents in Aberdeen have fallen a significant 15.9% over the last year. With oil prices around the $30 mark and with yet more supply from Iran now on-stream there is every reason to believe that the North East property market has further to fall and drag the national average down with it. Indeed it isn’t hard to foresee annual growth for Scotland tending towards zero later in 2016.

Meanwhile Edinburgh has overtaken Aberdeen as the most expensive city to rent in Scotland with its 11th successive quarterly rise. Whilst annual growth may have cooled slightly to 5.7% the Capital’s market seems set to continue to rise throughout 2016.”

Edinburgh average rents now stand at £951 per month with positive gains recorded for all property types. The Citylets Edinburgh index stands at an all time high.

Glasgow continues to edge up steadily at 4.2% breaking the £700 barrier to average £701 per month. Properties are also moving faster now, typically taking just 21 days to rent.

Aberdeen’s downward curve has steepened and falls are almost certain to continue throughout 2016 and beyond. Average rents are now £934 per month with average time to let lengthening to 46 days.

The Dundee market enjoyed more marked positive annual growth than in recent quarters, up 4.6% to average £570 per month.

The full Q4 2015 report can be found at https://www.citylets.co.uk/research/reports/pdf/Citylets-Quarterly-Report-Q4-15.pdf 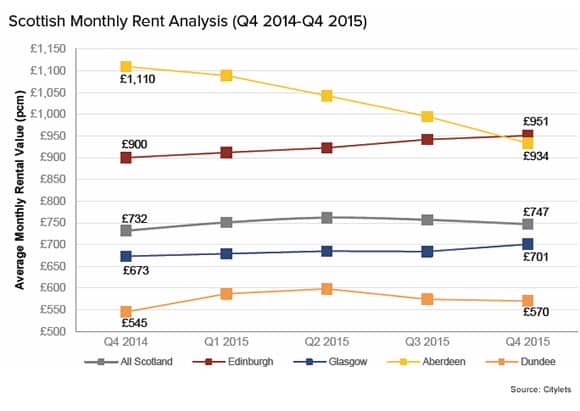