Average asking rents in the Scottish PRS now stand at £767 per month, up 2.1% on the year. Competing forces of growth in Scotland’s main cities with the exception of accelerated reduction of rents in Aberdeen continue to result in the same steady annual growth for the country as a whole as seen in the previous 2 quarters.

Overall average rents, however, for residential property in Scotland have hit an all time high.

Property to rent in Aberdeen have now fallen by more than 20% over the year, the steepest decline ever recorded in any Citylets quarterly report. The typical property in Aberdeen now rents at £865 per month taking 53 days to let. Such has the extent of the falls been that 1 and 2 bed properties are now renting for close to official mid market rent values for the region.

Whilst it is likely the rate of decline in Aberdeen will be close to or at maximum, the fall in rents is unlikely to bottom out until well into 2017.

As expected, the Edinburgh market continues its charge towards the £1000 average mark with rents up 6.6% on the year to stand at £972. One bed properties rose a full 9.5% to stand at £678 on average. Properties let very quickly on average at just 23 days. Now into a 4th year of consecutive quarterly rises, the capital seems set to climb higher still however a slowdown in growth would not be unexpected as affordability constraints are tested.

Elsewhere, Glasgow continues its steady upward climb to £710 per month up 4.6% on the year, the rate of the long term average over the last 5 years. Again it was 1 bed properties rising fastest at 8.8% and taking just 26 days to rent.

Dundee is also on the up recording 5.6% annual growth to now average £620 per month. With development of the Waterfront area gathering momentum, Dundee may now find itself on an upward trajectory so long enjoyed by its City neighbours 50 miles to the North and South. 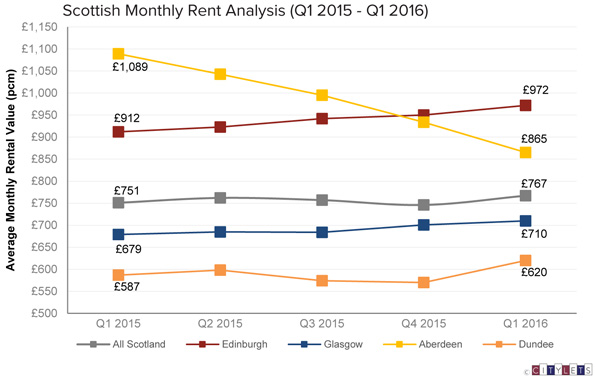