As a lettings only portal the increase in coverage given by the main stream media to the private rented sector (PRS)  is certainly reassuring.  It is now widely recognised that the PRS has been growing in size and significance over the last 10 years, and we would argue that the quality of property and standards of service within the PRS have improved significantly in this time.

The bar chart below shows that in 2010/11 more than double the number of households (100,000 +) moved in to the private rented accommodation  than the social rented sector (<50,000) and with so little new housing being completed it is not surprising that the PRS has become the focus of attention.  However, much of the commentary is overly negative with misplaced emphasis on so called ‘rogue landlords’, ‘rogue letting agents’ and ‘rip-off rents’ despite scant objective evidence that in Scotland this is the case. 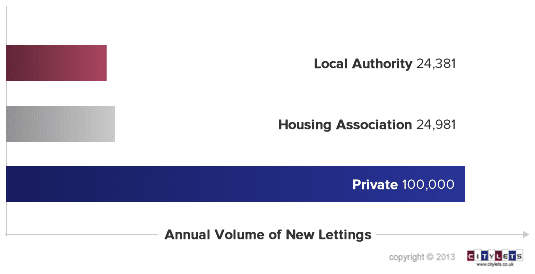 Citylets have been analysing the trends in the Scottish rental market for more than 7 years and we have witnessed a strong growth in both demand and supply of properties. It seems these two market forces are well balanced with average rents easing upwards at a rate that is below both house price inflation and general inflation.  In October 2012 the Citylets Scottish rental index (Jan 2006 = 100) had a value of 114.8 which means average rents rose by almost 15% since 2006 while Scottish house prices rose by 22%.  However background inflation which is measured by the Consumer Price Index (CPI) has risen by 25% in the same period which means over those seven years average rents have not kept pace with inflation.

Our chart shows the relative change in house prices, rents and inflation across Scotland sine 2006.  It is clear that yields are generally improving as property values have flat lined over the last 3 years while rents have increased slowly. We will be exploring yields in more detail in future blog posts.