The 25th issue of the quarterly report from Citylets shows that in the first quarter of 2013 average monthly rents in Scotland rose by 1.7% over the year to £675. While this slight increase in rents did not match the Consumer Price Index (CPI) measure of inflation (2.8%), landlords will be relieved that there was some uplift in rents.  In the same period, Registers of Scotland reported that average sale prices for flats in Scotland were down by 1.7% which indicates a general improvement in rental yields.

Analysis of gross rental yields (GRY) in Q4 2012 shows that the three local authorities with the cheapest flat purchase prices have the highest GRYs of above 8%:

North Lanarkshire 8.8%, Renfrewshire 8.6%, and Falkirk 8.5% – in Edinburgh, a typical 2 bedroom flat achieves rental income of nearly £9,000 per annum but with a higher average purchase price this drives down typical GRY to 5%.

The major Scottish cities all saw larger rises in rents than the Scotland figure with Edinburgh up 3.7% at £817 and Aberdeen up 5.3% at £961, which sets a new high for the city which is now 42% more expensive than the Scottish average. Glasgow saw average rents increase by 2.9% to £613 while Dundee, the cheapest city in Scotland to rent, saw growth of 3.2% to £572. 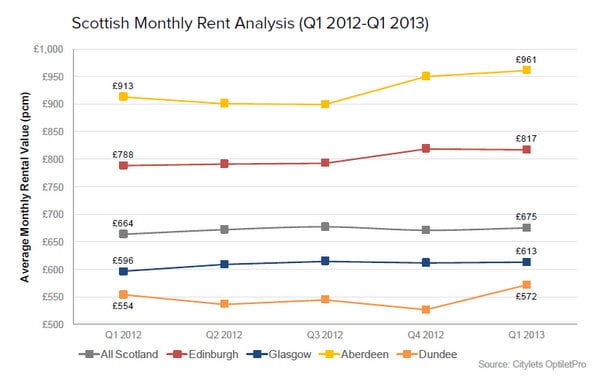