With the increasing recognition of the significance of the Private Rented Sector (PRS) we thought it would be useful to explore some of the statistics that show the extent of the growth of the PRS in Scotland over the last 20 years or so.

We know from the Scottish Household Survey (SHS) that the estimated stock of property in the PRS has steadily grown from 155,000 in December 2000 to 290,000 in the most recent survey period for March 2011,  which represents an 87% increase. It is worth highlighting that the latest SHS figures reveal that the stock of PRS property exceeded that of Housing Association property (275,000) for the first time. Unfortunately we will have to wait until the Scotland Census 2011 results are published at the end of this year to get the definitive picture on numbers of households in the PRS.

There have been a number of key drivers for the expansion of the PRS. The availability of Buy to Let mortgages and the rapid adoption of the short assured tenancy have certainly played their part but it could be argued that the larger socio-demographic and economic changes over the last few decades have had a larger impact.  It is clear that the workforce now is far more willing to move than it was twenty years ago – and in that context renting is the easiest option. Indeed there is plenty of economic evidence to suggest high levels of home ownership are correlated with high levels of unemployment.  So the growth of the PRS can be seen as a positive indicator for the economy. Tim Harford puts it very nicely in his Renter’s Manifesto here: https://slate.me/1bvPPWT “Renting your home and staying flexible do wonders for your chances of always finding an interesting job to do.”

Perhaps the most significant factor for growth of PRS has been the rapid increase in the number of households with a clear trend towards smaller households. These trends and the projections over the next 15 years are shown below but we would caution placing too much weight on the long term projections as they appear to be a simple continuation of trends from 1981 to 2008 and it wont be until Census 2011 results are published that an accurate picture of household composition is available. 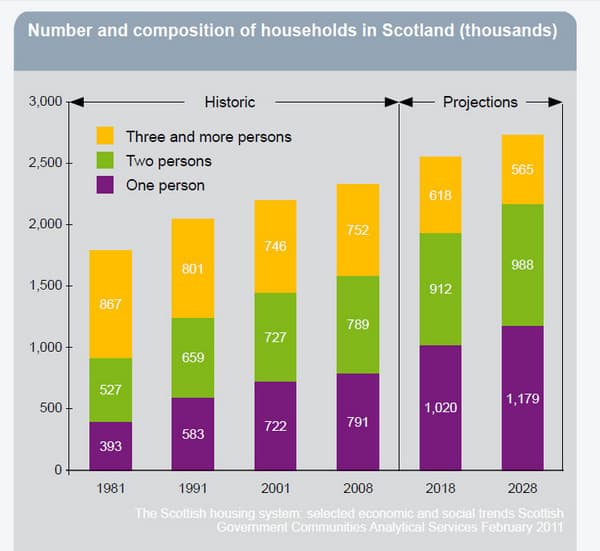 So the picture above shows a rapidly growing demand for residential property while the interactive chart below shows the extent to which new build completions in Scotland are at an all time low.

At the National Landlord Conference in 2010 we highlighted this issue with a slide entitled ‘Mind the Gap’ which showed the rapid decline in completions – since that time they have continued to fall. It is evident that the gap between demand and supply is higher than ever.  However, we are uncertain if policies such as the UK Government’s Help2Buy will have the level of impact that many property experts claim and we  anticipate ‘Build to Let’ to be a far more effective at providing the type of quality housing that a flexible workforce will prefer.  What is certain is that builders will no longer be able to churn out developments for sale without also considering the long term private rental market in the mix.