Three bedroom houses in Edinburgh’s Corstorphine, Clermiston, South Gyle and East Craigs saw a significant increase in average selling prices, rising 16.7% YOY to £329,182. In contrast, Gilmerton and Liberton saw the largest decrease, down 16.9%, with average selling prices sitting at £222,580. This, however, was due to these areas having a larger volume of lower-value three bedroom houses being sold. 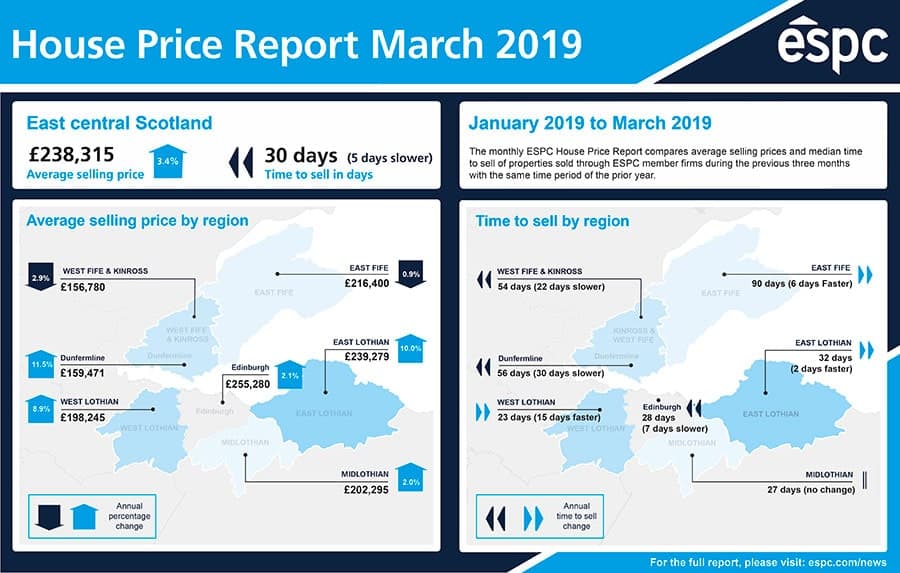 The quickest type of property to sell during Q1 2019 was 1 bedroom flats in Dalry, Gorgie, Slateford and Chesser with a median selling time of 15 days. These properties, as well as one bedroom flats in Meadowbank and Abbeyhill also recorded the highest percentage of Home Report valuation at 108.1%.

ESPC’s Business Analyst, Jamie Fraser-Davidson, said: “Over the past three months, we have seen another reasonable increase in median selling times in east central Scotland, with homes selling five days slower than last year. Homes are also achieving a slightly lower percentage of Home Report valuation on average, while the number of sales with a closing date has dropped compared to last year.”