The last three months of 2019 saw a reduction in the volume of properties coming to the Lothians, Fife, Borders and Edinburgh; 7.1% less than the same quarter in 2018. The same areas also experienced 1.4% dip in sales volume YOY. There was a 14.1% decrease in the amount of homes coming to the Edinburgh market as well as a 3.2% drop in the capital’s sales volume, compared to the same period last year.

The same size of houses in Blackhall, Davidsons Mains and Silverknowes experienced a decline of 23.3% in average selling price. However, this area saw a greater proportion of lower value homes being sold, causing the drop in YOY difference.

West Fife and Kinross also recorded a decline in average selling price in the last three months of the year, by 6% YOY to £169,537. Dunfermline experienced a 9% decrease compared to the same period last year. 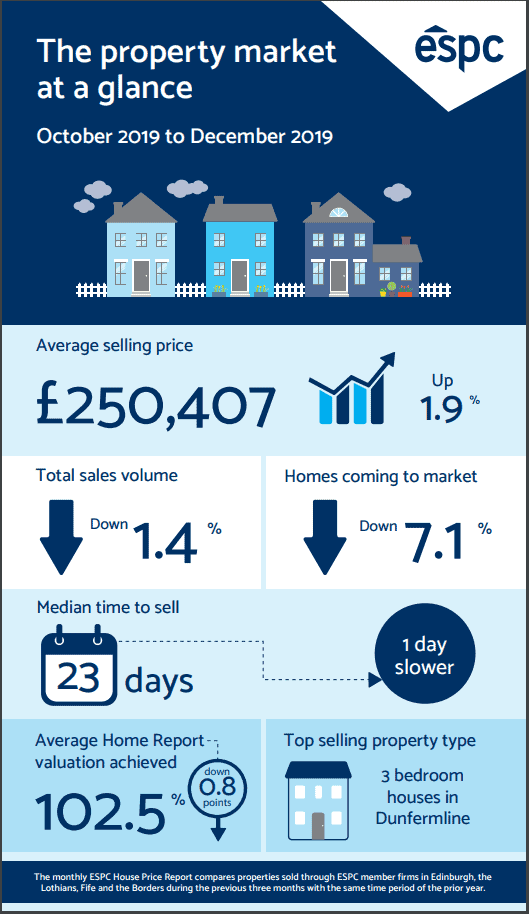 East Lothian properties saw a significant 11.7% YOY increase to £257,972 for average property selling price. The Borders experienced a 4.2% increase for the same period and West Lothian recorded a 7.4% increase.

ESPC’s Business Analyst, Jamie Fraser-Davidson, stated: “The end of 2019 saw a slight increase in average selling price in Edinburgh, the Lothians, Fife and the Borders, along with a slight decrease in sales volume. However, the most notable figure was the drop in the number of homes coming to market, particularly in Edinburgh.

“This could be a result of seller confidence being dampened by the General Election and upcoming Brexit deadline, or that sellers are being deterred through lack of choice of new properties. However, it is also worth noting that the final quarter of 2018 saw a significant spike in the number of new homes coming to market, making a year-on-year decrease in 2019 more likely.

“The two property types with the top sales volume are in Dunfermline – the Fife town has experienced a 31.1% year-on-year increase in sales volume, suggesting people are looking for homes out of the city, yet with easy access to local amenities and transport links.”

October to December 2019 saw properties in Edinburgh, the Lothians, Fife and the Borders take one day slower to go under offer (median time being 23 days) than for the same period in 2018. Edinburgh experienced the same median selling time as the previous year, at 20 days. Portobello and Joppa’s two bedroom flats took a median selling time of just 15 days (four days slower than the last 3 months of 2018).

The average percentage of Home Report valuation for Edinburgh, the Lothians, Fife and the Borders in the last quarter slightly dropped from 103.3% in 2018 to 102.5% in 2019. Edinburgh’s was 0.9% less than the previous year. Portobello and Joppa’s two bedroom flats recorded the highest percentage of Home Report valuation on average at 110.6%, which was 2% higher than the same quarter last year.