Whatever the result of the EU referendum today, it is clear that both Scottish Landlords and Tenants appear to favour Remain.

A Survey of 1000 Scottish tenants conducted by Citylets showed that 39% of those who currently rent, but want to own their own home, saw staying in the EU as better for home ownership prospects.

18% favoured Leave with a significant 35% saying they did not know, a reflection of the bamboozling array of information the electorate has been asked to decide upon. 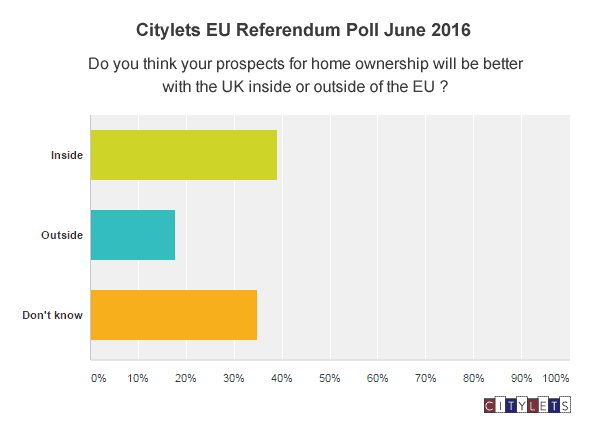 With 85% of respondents aged between 18 and 49, the findings are consistent with the general trend of younger voters who favour staying in the EU, according to recent polls, however are at odds with the oft stated view that house prices would fall if the UK voted to leave.

Explaining the contradiction, views were expressed that the bigger picture of the long term health of the economy was more important than a possible dip in house prices upon leaving.

Those who felt being outside the EU was the better option for would-be home buyers cited lower house prices through perceived less competition as a determining factor in their vote.

Some respondents echoed the hopelessness felt by many tenants citing simply that things ‘couldn’t be any worse’ and had nothing to lose by voting Leave.

Another recent survey by the National Landlords Association recorded 42% of landlords in Scotland in favour of the UK remaining in the EU with 30% in favour of leaving. 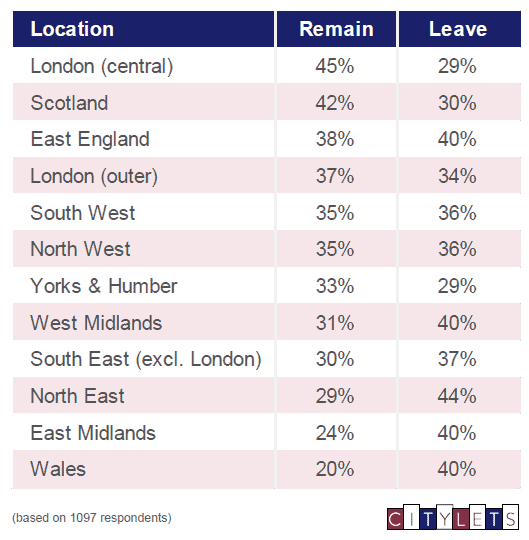 Indeed the proportion of Scottish landlords intending to vote Remain is the second highest in the UK after London (45%). In contrast, however, 44% of landlords in the North East favoured leaving. The UK-wide landlord community is evenly split overall (35%/35%) with a significant number (30%) still undecided as to how to vote.

Whatever the result today, as with the Scottish referendum less than 2 years ago, it has proved to be a highly divisive political event and a lot closer than most would have predicted. A significant 60% of tenants polled said they felt Scotland would be more likely to become Independent should the UK vote to leave the EU, perhaps unsurprising given the reported leaning of Scottish voters towards Remain.