We are in the midst of compiling our analysis of the Scottish private rental market for the fourth quarter of 2012.  Here is a quick preview:  As the chart below shows there have been dramatic increases in average monthly rent recorded in the fourth quarter in Edinburgh and Aberdeen.  However, our preferred basis for analysing  rents is to look at year on year change in the quarterly figures which removes any seasonality.  On this annual basis rents have increased in Q4 2012 by 5.1% in Edinburgh, 6.3% in Aberdeen and 2.2% in Glasgow while the national average increase was 2.3%. 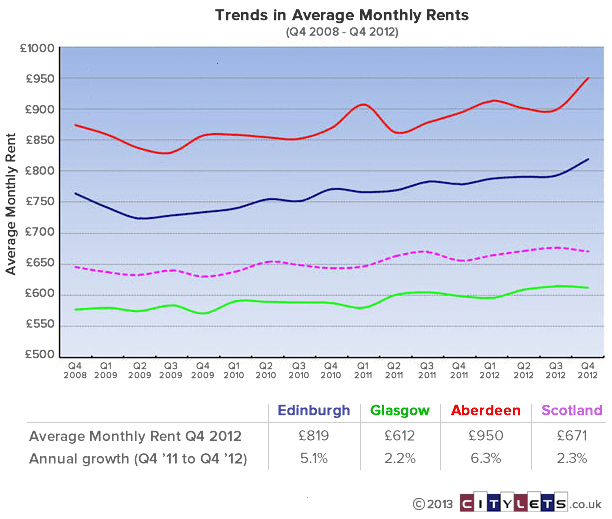 The Office of National Statistics published the latest Consumer Price Index figures for December 2012 earlier today and reported that annual UK inflation was up by 2.7% which is the same figure recorded in both October and November.  In this context the annual rises of 2.3% in rents in Scotland is not overly concerning given it is just below the rate of inflation, however the increases of 6.3% in Aberdeen and 5.1% are far more significant and there is certainly more than a suspicion that the recent banning of agent fees to tenants has had an upward impact on rents.  Several agent clients have already identified this to be the case and our data certainly seems to back this up.

It is also evident that demand for quality private rental property continues to grow with shortening time to let figures for all the major urban rental markets.  The average Aberdeen property now takes less than three weeks to let (18 days) though 1 bed flats take just 9 days which is the shortest figure we have ever seen.

Continually increasing volumes of traffic to the Citylets Website also indicate a growing demand for private rental property though it is interesting that the volume of rental transactions in Q4 2012 was just below those reported for Q4 2011.  The Citylets Rental Volume Index stood at 152 in Q4 2012 versus 157 in Q4 2011 which suggests that there are growing pressures on supply, something that agents have been telling us could be because of longer tenancies. 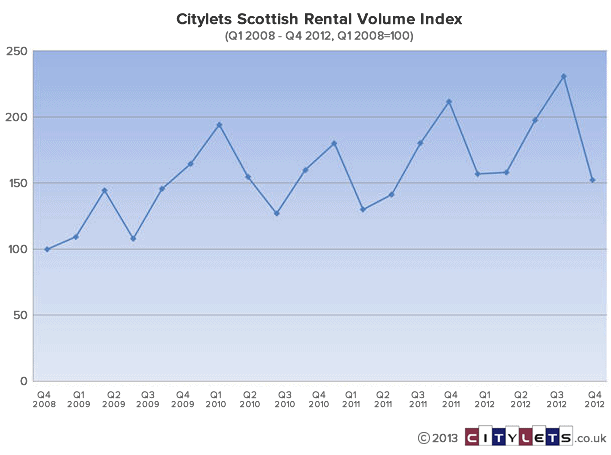 Our more detailed analysis of the rental market across Scotland will be published in our  24th issue of the Citylets Report in the near future.

One comment on “Urban Hotspots See Sharp Rise in Rents”